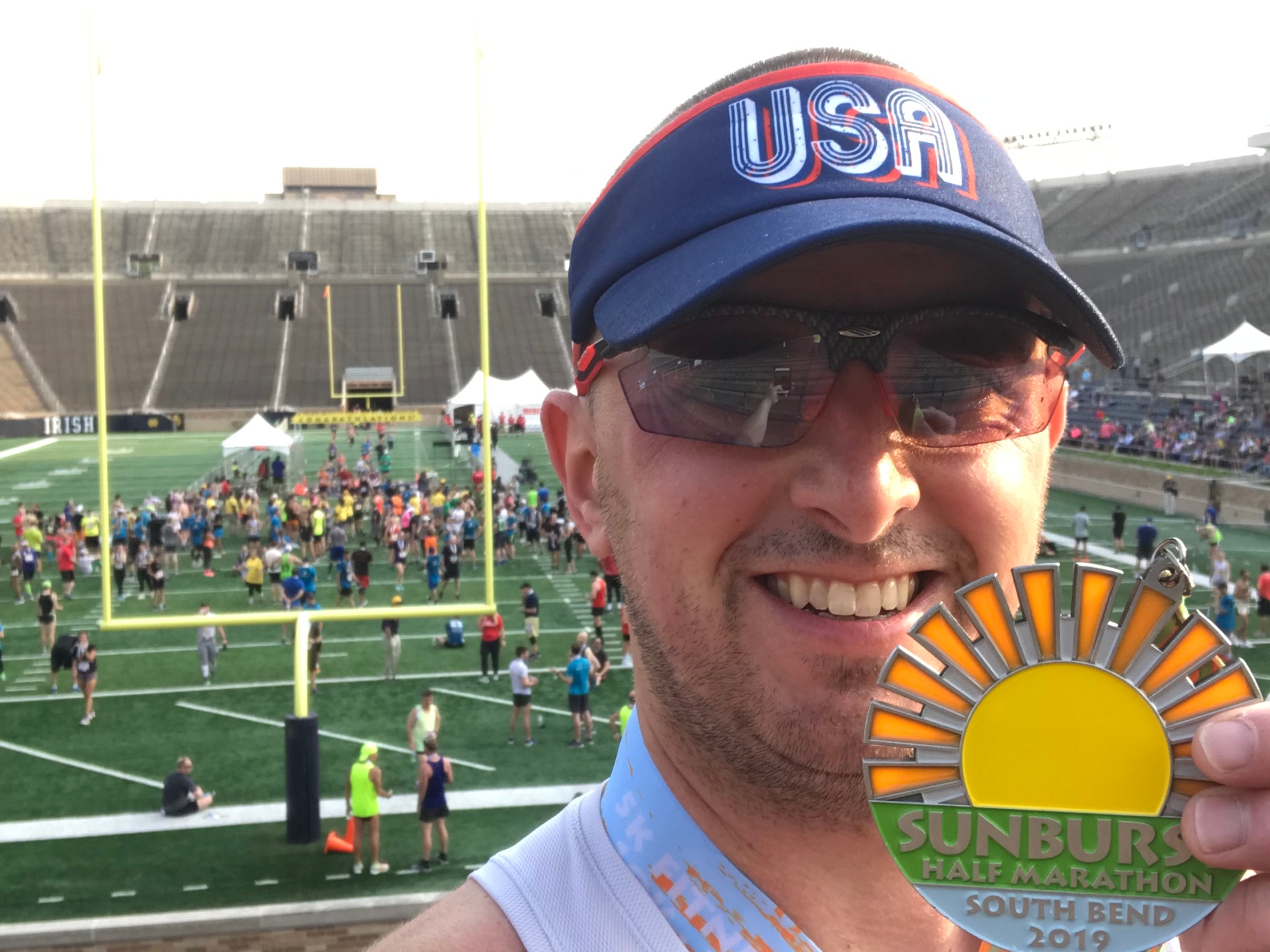 Over the years, I have had a love/hate relationship with the Sunburst Half Marathon. I loved to hate it. Then a couple years ago, a new race director took over, made some changes, and the race was showing improvements. Then this year, s new race director took over and it seems to be back to where it was, maybe even worse. I had seriously considered not running this event at all this year. Then I won a free race entry at our running club awards banquet for 2018.

This years race was held on June 1st and followed the same course as the last couple of years. There are 3 race options: the half marathon, a 10k, and the 5k. Race weekend kicks off the day before the race with the expo held at the Century Center in down town South Bend. The expo is pretty easy to get around. When you enter the expo area, you pick up your packet along with your shirt at the same table. For the first time in recent years, they didn’t give you a bag for gear check. That’s because there was no gear check on race day. Apparently runners had not been using it enough, so it wasn’t offered.

The rest of the expo was mostly small with a few races present, along with local businesses. Fleet Feet Mishawaka had a huge presence at the expo bringing most of their store. The expo was open from noon until 8:00. If you paid extra, you could pick up your packet on race day.

This years shirt was a “poly/cotton blend.” This was the worst poly/cotton blend shirt I had ever seen. 90% cotton, 10% polyester. From what I have heard there has been a lot of complaints about the shirts, so I guess I will pile onto that. If I had paid the astronomical race entry for this race, I would be even more upset.

All races start at Four Winds Field (home of the low A affiliate of the Chicago Cubs, the South Bend Cubs) and finish at the 50 yard line of Notre Dame Stadium. The finish is probably what brings most people to this race and is probably the only thing that keeps this race alive. There have been some years where the race did not finish in the stadium and registration numbers were down.

The half marathon starts at 6:30am followed by the 10k and 5k throughout the morning. We will get I to the timing of other race starting later in the review.

The half marathon course starts outside the baseball stadium in down town South Bend and then starts heading west and basically makes its way to the neighboring town of Mishawaka. The part of the course in Mishawaka is actually my favorite part of the race. There is about a 2.5 mile section of the race that is along the river walk. It is probably the most scenic portion of the race.

It’s amazing to me though, with as many neighborhoods as you run through, there really isn’t much crowd support along the course. It is really kind of dead which continues to be a disappointment to me.

There are a couple of sections of the course I do not like. One is where the 10k and half marathon join. The half marathon runners are coming from the south and heading north while the 10k runners are coming from the west and making a left turn to join the Half course to head north. This meant the course became very congested fast. To make matters worse, they put an aid station right after that turn in the middle of the road. As I was getting my water at this aid station, 10k runners were cutting completely over onto the other side of the road cutting me off. Took everything in me not to trip over them.

Another section is about and back section at I believe around mile 8 that is probably about 50 meters out and 50 meters back. Just move the start line back 100 meters so we don’t have to do this. Plus it’s after the 10k joins the half marathon course making it very crowded hairpin turn.

The last section was where the half marathon/10k course is joined by the 5k course. This really didn’t effect me at all but it did the back of the packers. By the time the back of the half marathon pack got to this point (11.5 miles), the 5k walkers were coming through and the half runners had to zigzag through them. I was walking back to find my wife after I finished and noticed all of this going on. I was telling any half runner I saw to run on the sidewalk so they didn’t have to zigzag through all the walkers taking up the whole road. They would be doing this until they finished at the stadium.

All of these things of the course can be corrected by a few simple changes. It’s as easy as moving the starting line back and adjusting start times or enforcing runners/walkers or the shorter races stay to one side of the road.

I don’t know where I stand on running this race again next year. It seems that as registration prices seem to creep higher and higher, the value goes lower and lower. The great thing is that all my running friends are typically running and it’s always great to see them.

As for my race, it wasn’t too good which is how it usually goes for Sunburst. I ran in 1:35:38. Not gonna lie, I stopped caring half way through and just relaxed the second half. I ended up finishing 7th in my division.

I am a husband, father, and runner. I have completed 23 marathons, and countless other races. I will be participating in the 2015 Boston Marathon. I am also the Co-Race Director for the Sarah Strong 10k Run, 5k Run/ Walk, and Kids Fun Run on March 7, 2015. View all posts by markdavidhizar